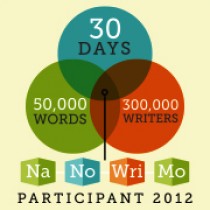 National Novel Writing Month seems like it has been around for ages. (Actually, I just checked their website. It started in 1999, picking up in popularity with each subsequent year). It’s always been something I’ve wanted to do, but every year I have found numerous excuses as to why I simply could not. “I’m too busy!” “Too much work!” “I’m traveling!” “It’s my birthday month!” etc. etc.

The truth is, I was too scared. Despite it being a dream of mine to complete a novel, I was too afraid of throwing my name in the ring and actually committing to it. Last year, I got a step closer. I thought to myself “Well, I won’t officially sign up, but I’ll still write a novel.” And I worked on Winter Wilder during the month of November.

But did I finish a complete novel? No.

Because nothing was holding me accountable, there was nothing at stake. No one ever had to know that I didn’t reach the goal that I had set out to accomplish. And if there’s one thing I hate, it’s falling short of my goals. Especially when I’m the only one to blame.

Now that I’ve finished Winter Wilder, I realize that completing a novel isn’t as big and scary as I always thought. Seeing as how WW is currently around 100k, writing 50k in a month seems perfectly reasonable. That’s an average of 2000 words a day. I can do that!

So this is the year that I’ve decided to officially sign up and complete a new novel. I will share my progress as I go along. And since I am extremely motivated by deadlines, I think I have a good shot it, now that I have publicly declared my intention to meet said deadline.

I already know what idea I’m going to write about… but I’ll save that for my next post. In the meantime, I encourage you to join NaNoWriMo and buddy me so we can follow each other’s progress and cheer each other on!

My username is taniadelrio. Let’s do this!