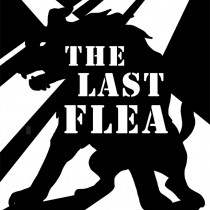 This short short story (586 words) was originally a submission for an e-pub contest hosted by Lulu. The max word count was 600 words, so it was a challenge! Like my other short short, Curiosity Shop, this story was directly inspired by a dream I had.

The girl crouched in the shadow of a building, her dog, Flea, at her side. The earth trembled as three search copters roared overhead, blades cutting the air with dreadful thwacks. The girl buried her face in Flea’s black fur and shivered. It smelled musty like dirt and mildew and dried pine, yet it comforted her, and her nausea passed.

The copters rumbled into the distance and faded away. The girl and Flea were safe for now, but the copters would be back. They always came back.

“Let’s go,” the girl told Flea. He tilted his head and scratched vigorously behind his ear. She tugged at his collar and they sprinted across the clearing of the village square back into the bordering forest. It was the safest place to be because it offered the most cover, but it was also the worst because it was cold, dark and wet, and there was no food. Which is why they had to venture into town to steal scraps. She had tried to get the dog to wait for her in the safety of the forest while she infiltrated the village, but he was loyal to a fault. He wouldn’t leave her side.

At first, it was hard to avoid the people in the village, any of whom would turn them in without hesitation. But the population had dwindled since the virus hit. There was less danger of being caught now, but less food too.

That night, as they lay beneath a copse of trees, the girl thought about how the night used to be alive with the sound of barking and howling dogs. Sometimes it got annoying, but she would have given anything to hear that cacophony again.

“Are you sad?” she asked Flea. “Being the last one left?”

The dog let out a heavy sigh and laid his square head on his enormous paws.

“They won’t get you,” the girl said firmly, scratching him behind the ears. “I promise.” The dog arched his neck against her hand, begging to be scratched harder. She shuddered, feeling ill, but tried to ignore it.

That night the copters returned, their white searchlights piercing through the trees like knives. The girl sat very still and prayed Flea would do the same, as the leaves trembled around them from the force of the copters’ blades, shaking startled birds awake.

“We know you’re down there,” a voice barked through a loudspeaker. “Give him up now!”

The dog curled his lip and growled.

“Shhhh,” the girl hissed, clamping her small hand over the dog’s muzzle. Under her touch, the dog turned placid and rolled pleading brown eyes toward her.

Suddenly, there was the sound of crashing brush. Several armed men in hazmat suits leapt into view. The girl wailed and wrapped her thin arms around Flea who snarled menacingly as the men pointed guns at them.

“Release him or get shot!” one warned her.

“You can’t have him!” She screamed. She could feel her blood’s temperature rise as a change began to overtake her. She trembled as her nails sharpened into points.

“Shit! She’s got the virus!” One of them cried.

“Of course she’s got it! The dog is a carrier for the last infected flea, idiot.”

The girl had turned into something else. Red rage clouded her eyes. The men fired, but she was faster.

“We’re going to need a new hiding place,” the girl told Flea. Panting, he scratched behind his ear.